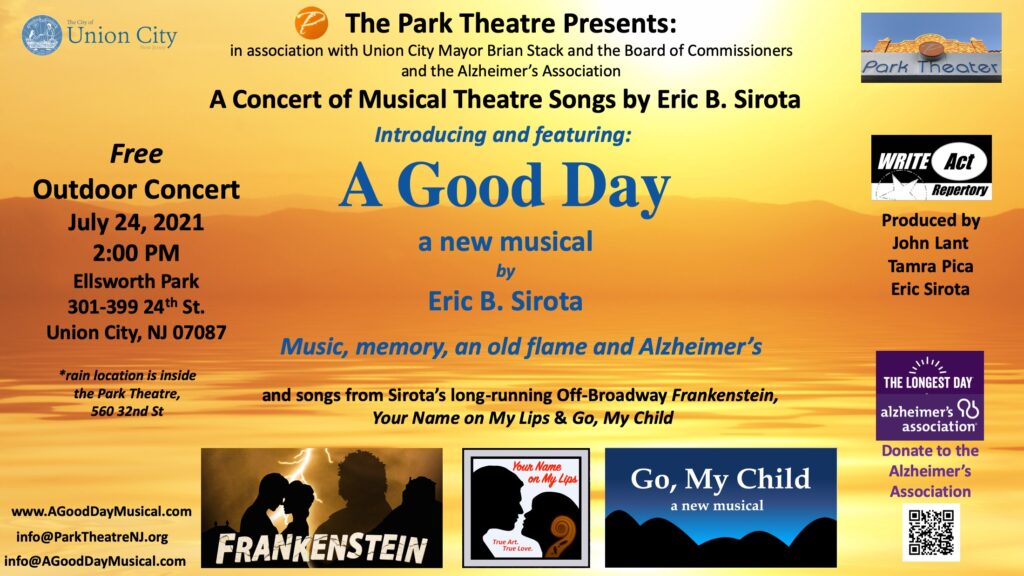 A Good Day
a concert of songs from the musicals of
Eric B. Sirota
featuring Sirota’s new musical A Good Day

The concert will feature songs from:
Frankenstein
Go, My Child
Your Name On My Lips
and
A Good Day

Donations to the Alzheimer’s Association are welcome: http://act.alz.org/goto/AGoodDayMusical

A Good Day
a new musical
music, book & lyrics by
Eric B. Sirota

Music, memory, an old flame and Alzheimer’s – You just hope for a good day.

A widowed artist, finds himself brought into the life of his childhood girlfriend, his first love, his muse, who spurned him over 50 years ago, and who now has Alzheimer’s.

Paint the sunrise in your mind.
Remember music left behind.
Untangle memories intertwined.
Don’t let the sun down.

Years ago as a child, Suzanna (now 72), instilled the love of music in her friend. But she gave up the cello and music, and gave up that young man who loved her. She moved on with her life and eventually he did too.
Now, 50 years later, Suzanna has Alzheimer’s, and her children would do anything to hear their mother speak their names.

Please contact me if you are interested in this work; and want further info.
email for more info